Hello!  Geez, it may not officially be summer yet, but it’s sure starting to feel like it.  So this blue waters, mermaid mani is just what I’ve been dreaming of.  Hopefully you don’t mind a little early summer look.

My first thought for this week was to use as many of my new polishes as possible.  But coming up with a cohesive design was harder than I thought it’d be.  I’ll have to keep thinking about it.  So as I was searching through all my nail art stuff for a new idea, something about this mystical stamping plate from Bundle Monster just called to me.  I chose the mermaid row for this week, and maybe next week I’ll go with the dragons?  Well, a quick “mermaid nails” search on Pinterest gave me some great ideas.  But none of them were stamping designs. They were all glitter, studs, or scales.  But then, the colors from @_stephsnails_‘s mani just gave me so much inspiration.  It’s obviously a completely different design, but I just love the colors.

I started off with another new base coat.  This time it smelled like fresh apples, and was much more subtle than the Frooty Pebbles scent.  I like it better, actually.  Then I applied three coats of blue.  I tried getting away with only two coats, but just couldn’t leave it like that.  It was just too spotty.  I was also debating on using one of my new thermals (because I wanted a gradient effect without doing the work), but the name Salt Water just fit too perfectly.

I applied some liquid latex around my nails so I wouldn’t have to clean anything up.  And then did a few practice swatches on my mat.  I did:  blue on bottom with purple on top, purple on bottom with blue on top, random spots of color, and then layered stamps. The layered stamping won out. How could I not choose all purple mermaids? 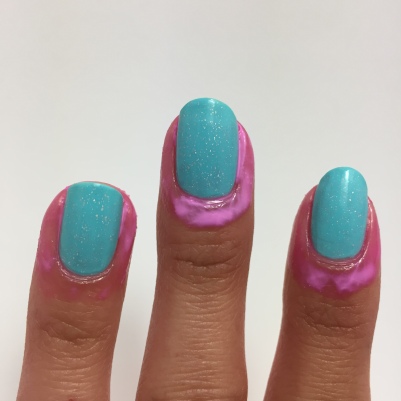 Three coats of Picture Polish-Salt Water, and some liquid latex around it 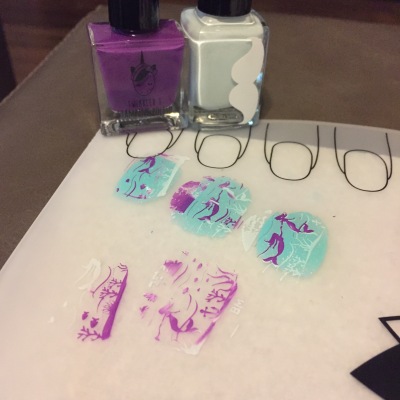 Trying to decide what I wanted to do

Once I was done stamping the purple mermaids I felt like the whole mani needed some more color.  So I went through my darker blue/teal colors, and decided on trying to stamp with an ELF polish that I’ve had for forever.  It worked really well, and for being so cheap that’s great.  But I think my only grief with this polish is that it’s called “Teal Blue” when it actually looks very green! 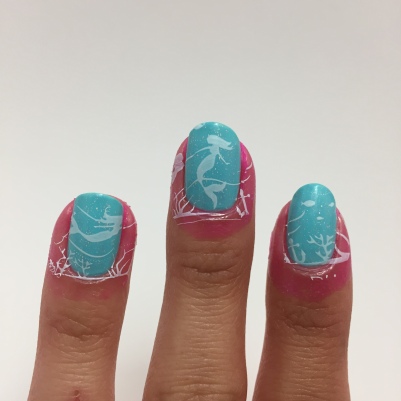 The first layer of stamping, with light blue 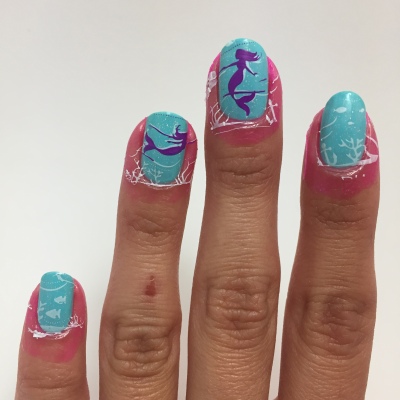 The second layer of stamping, with purple

The last step was to apply top coat.  And I love how quickly stamping polishes dry because that meant I could top coat right away.  My only problem was how little of the Glisten & Glow I had left, and that my only other top coat was Cuticula (which smudged the first time I used it).  So I came up with the solution:  combine two very low bottles of Glisten & Glow to get me through this week.

The end product is so cute!  And my top coat solution worked just fine.  Not to mention how quickly this got done.  I would say this was a major success. 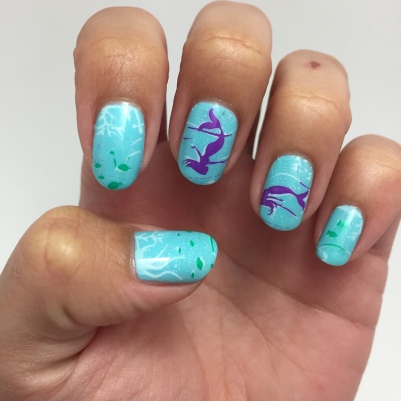 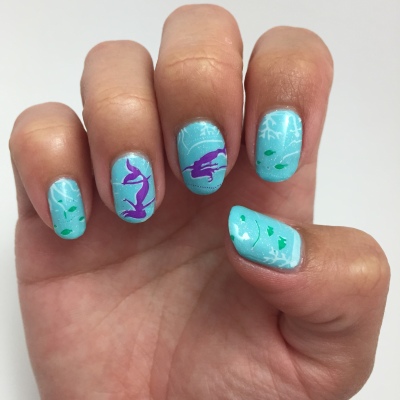 So this would have been a perfect, no-chip week, but I had to go and screw it all up.  We decided to BBQ over the weekend, and before we even got to the drinking and cooking, my thumb nail chipped.  The culprit was a stupid package that I was trying to pry open.  At least I got it open, but there was no way to save my thumb nail after that.  I would’ve filled it with blue, but I felt too defeated.  Oh well, you can see that the rest of my nails looked great.  They didn’t even have wear at the tips.  And also, kudos to me for not doing my usual picking. 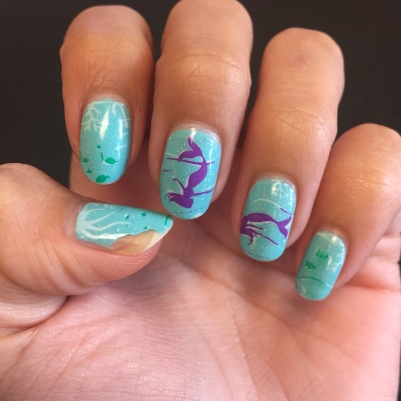 I chipped my thumb nail 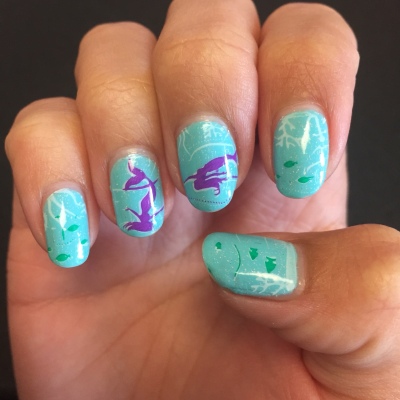 All my other nails were perfect