Hello!  This week’s manicure is a hodge podge of colors because I couldn’t make up my mind.  Plus, I left it up to my boyfriend.  Luckily he did a pretty good job of choosing things that go together.

Like I said, I had no clue what I wanted to go with this week.  But that was because I wasn’t feeling light colors or floral designs.  As beautiful as those are, I needed something different.  But nothing too far off from a spring theme.  (Can you tell how indecisive I was? Haha)  So while my boyfriend was going through all of my polishes, I went through my nail vinyls to find something that would fit anything he picked.  I definitely wasn’t expecting him to choose so many.  But I think the Twinkled T paradox stencils that I went with makes all these colors look almost like shattered glass.

At first, I started with base coat and one thick coat of Alpine Snow.  But during work on Thursday, I realized how badly I painted them the night before.  They were patchy and uneven, so I decided to just completely redo them.  The second time around, I went with two thin coats and it looked so much better.  I then added some liquid latex so I wouldn’t forget later.

Since I knew I wanted a random shattered glass look, I cut up the vinyls (stencils?) and fit them as best as I could.  Does anyone actually know the difference between nail vinyls and nail stencils?  They’re the same in my mind.  Anyway, I took a small nail art brush, with blobs of the colors in a tiny plastic cup, and filled in the triangles.  But some of the triangles were too big.  They took up almost my entire pinky nail, so I basically made my own shapes within the bigger ones. 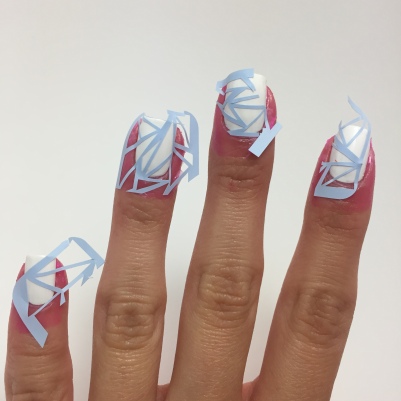 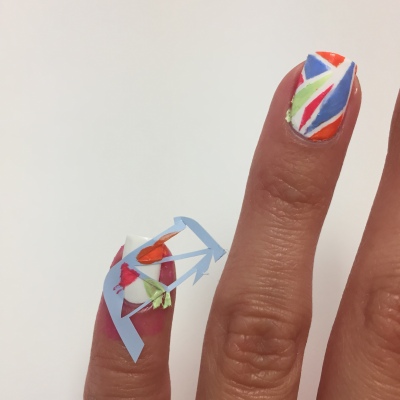 Finally, after looking at all the bright, beautifully colored shapes, I felt like they were missing something.  And so I added holo!  Which sadly covered up the shapes a little more than I wanted.  But I think all the holo-sexuals out there would be disappointed in me for complaining about too much holo.  I think the thing that took me the longest for this whole manicure was cleaning off the brush in between every single color.  Other than that, this was definitely one of the easiest I’ve ever done.  And even though I couldn’t decide what to do (down to the very last step), they turned out pretty fun. 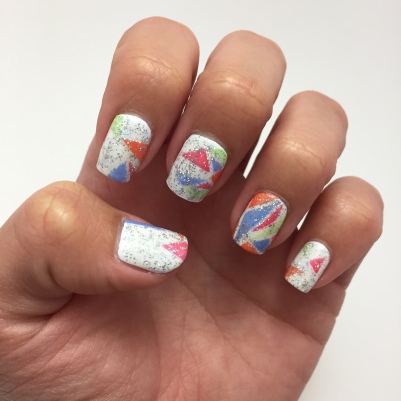 I know this is late, but I hope everyone has had a great start to the week!

I only really picked at one nail this week.  But, boy did I pick at it!  I pretty much took off half of the polish on my pointer finger.  And of course I had to do a rough repair of it so I wouldn’t move on to destroy my actual nail.  You can see the blurred holo because I was impatient, and smudged the top coat.  The only other exciting tidbit is that I’ve finally decided to give up on trying to square out my nails.  I’ve been going through my old pictures, and the round tips were just so much easier to manage.  Plus, I think I’ve subconsciously wanted them back because the squared edges were always the first thing I picked at.

You can see the rushed patch job on my pointer finger 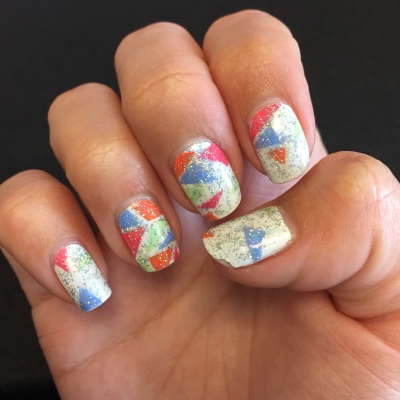