Hello again!  It’s still technically winter, but since the time change is ‘springing forward’, I figured it was safe to do a semi-spring mani.

I didn’t really plan ahead for this week, other than the colors that I wanted to use, so that meant quite a bit of experimenting during the process.  But what better way to kick off spring than with my favorite color?  I went through all of my purple polishes, (which I never realized how many I actually had until now) and finally decided on using the ones that I hadn’t gotten to try out yet.

I started out a little differently this time.  Instead of just doing my nails in full on Thursday night, I decided to change things up a bit.  I painted the base color on Wednesday, and finished the art on Thursday.  I’m hoping that I’ll now have some extra time to finish up my blog posts.

So I painted the normal base coat, and then three thin layers of LYNB Designs’ beautiful purple.  I don’t normally tolerate a polish that takes more than two layers to be opaque.  But I kept going because I could tell this one would be worth it.

Before I started stamping on my actual nails, I used my mini silicone mat to try and test out some designs.  I tried different floral stamps, since I wanted to still be able to see the base color underneath.  And I also tried different purples, and even tried some double stamping over white.  I wasn’t expecting to do amazing at my first time stamping over the same image, but I was expecting it to be a little easier.  Still, they were real sloppy swatches, so it was hard to get a good idea of what they would actually look like. 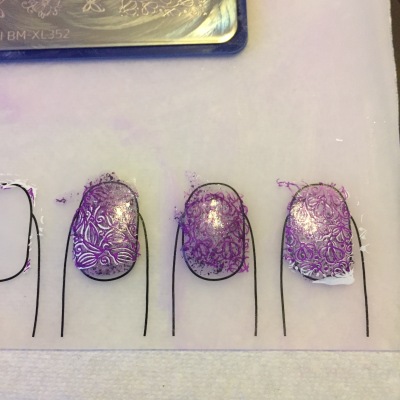 And guess which design I finally decided on?  The hardest one: stamping over the same image.  I used Bundle Monster – Bam! White as the first stamp, and it went on great.  (I added Poli-Peel before doing anything)  Luckily, I thought ahead.  Since the double stamping didn’t work so great on the mat, I decided to only do two nails at first.  Unfortunately, it didn’t work on my nails either.  I even put the stamp in the opposite direction on my ring finger.  So, I just decided to scrap that idea and go with one simple stamp in purple. 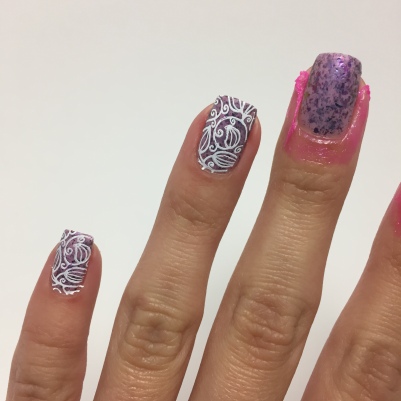 Then I messed up the purple on top

After redoing those two nails, they turned out great!  And I really glad I stuck with the monochrome purple look.  It was also so much quicker with the base coat done a day in advance!  I think I’m going to stick to that schedule from here on out. 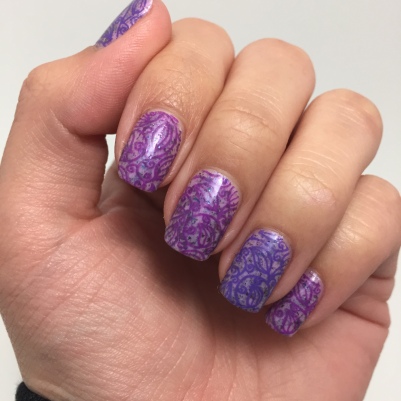 I hope everyone adjusts to the time change quickly!  Let me know what colors I should do next

After a few days I started getting really curious what these nails would look like if they were matte.  So I went ahead and added some Essie – Matte About You.  And I was hoping the extra layer of top coat would add some protection.  But I almost feel like it made them worse.  Even though the chips weren’t bad, they felt like they were lifting on every other corner.  I had to add base coat under the spots that lifted as a temporary fix. 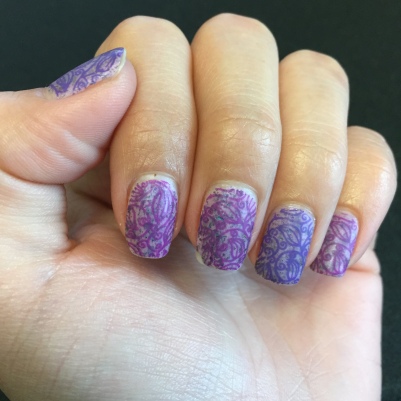 Only small chips this time