Hello and welcome!  This week I went for easy and bright because sometimes life just doesn’t want to give you time to sit and do your nails.

So I’ve had a pretty packed week.  It’s been a combination of fun and business (mostly fun though), but that sadly means no time for nails.  I had some car drama to deal with.  But also the fair is in town, so of course we went to enjoy the festivities, and to watch Lifehouse perform.  And then, my anniversary is coming up, so I spent two nights working on a secret present for the boyfriend.  I would’ve loved to do a cutesy anniversary mani.  But it was either the present or my nails.  So, I went to trusty old Pinterest and searched for quick and easy manicures.  And I found a good one from @nail_unistella.  It’s super simple, with just a touch of nail art.

I started with my Glisten & Glow base coat.  But since I was a bit rushed, I put on a very sloppy coat before leaving for work.  And then when I got home, I applied two coats of the gold.  It would have been a one coater, but you could see every single brush stroke.  So I had to try to cover it up.  I will say though, I love this gold on my skin tone.

Next, I applied the vinyls to the bottom of my nails (near the cuticles).  I was a little worried that the vinyl wasn’t curving up enough.  But I didn’t really have any other options.  Then I just applied one coat of red over top and removed the vinyls.  Luckily, there’s just enough of a curve for it to not look like a badly done straight line.

The vinyls placed near the cuticles 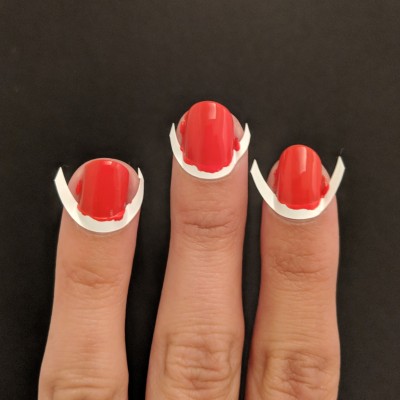 After applying top coat and cleaning up, I realized just how delicate and classy this ended up looking.  For some reason I was expecting to feel plain.  But sometimes simple and elegant makes the biggest statement.  Turns out, it was the perfect design for an anniversary mani.  And as an added bonus, it was extremely quick to do.

Have a great, stress-free week everyone!

I don’t think these polishes played well together.  I had a ton of chips and wear.  It was mostly on my more dominant fingers, but I don’t think I was any more rough on my hands than normal.  And then by Monday, I had picked at my middle finger so much that I had to cover it up.  It wasn’t perfect but it did the job, and it kept me from picking at it even more.

My left hand wasn’t too bad 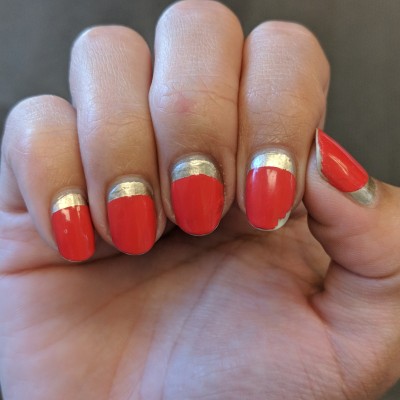 I got some worse chips on my right hand